Yonaguni, called “Dunan” in the native language, is the western-most island in the Ryukyu archipelago. There are three villages on the island - Sonai, the largest one located on the north coast, Kubura on the western coast, and Hikawa, the smallest, in the south.

The native language of the island is called “Dunan-Munui” where “Dunan” is the native name for Yonaguni Island, and “Munui” means “language”.

Due to assimilation policies in the 20th century, today, practically everyone on Yonaguni can speak Japanese, but you might notice that the way they speak Japanese is different from that of mainland Japan. It’s strongly influenced by Dunan-Munui, and in this way, the native Yonaguni language lives on, even if in a small way.

As a small island of just 25 sq. meters (11 sq. miles), Yonaguni has around 1,700 people. Compare this to Okinawa island (Uchinaa), which has a population of 1.38 million. On Yonaguni, pretty much everyone knows everyone, making it a small, close-knit community.

You can drive around the entire island in about an hour or have a nice scenic bike ride for around four hours. If you decide to bike or plan to walk extensively, take care to have plenty of water as the summers get pretty hot and humid, making heatstroke a danger. 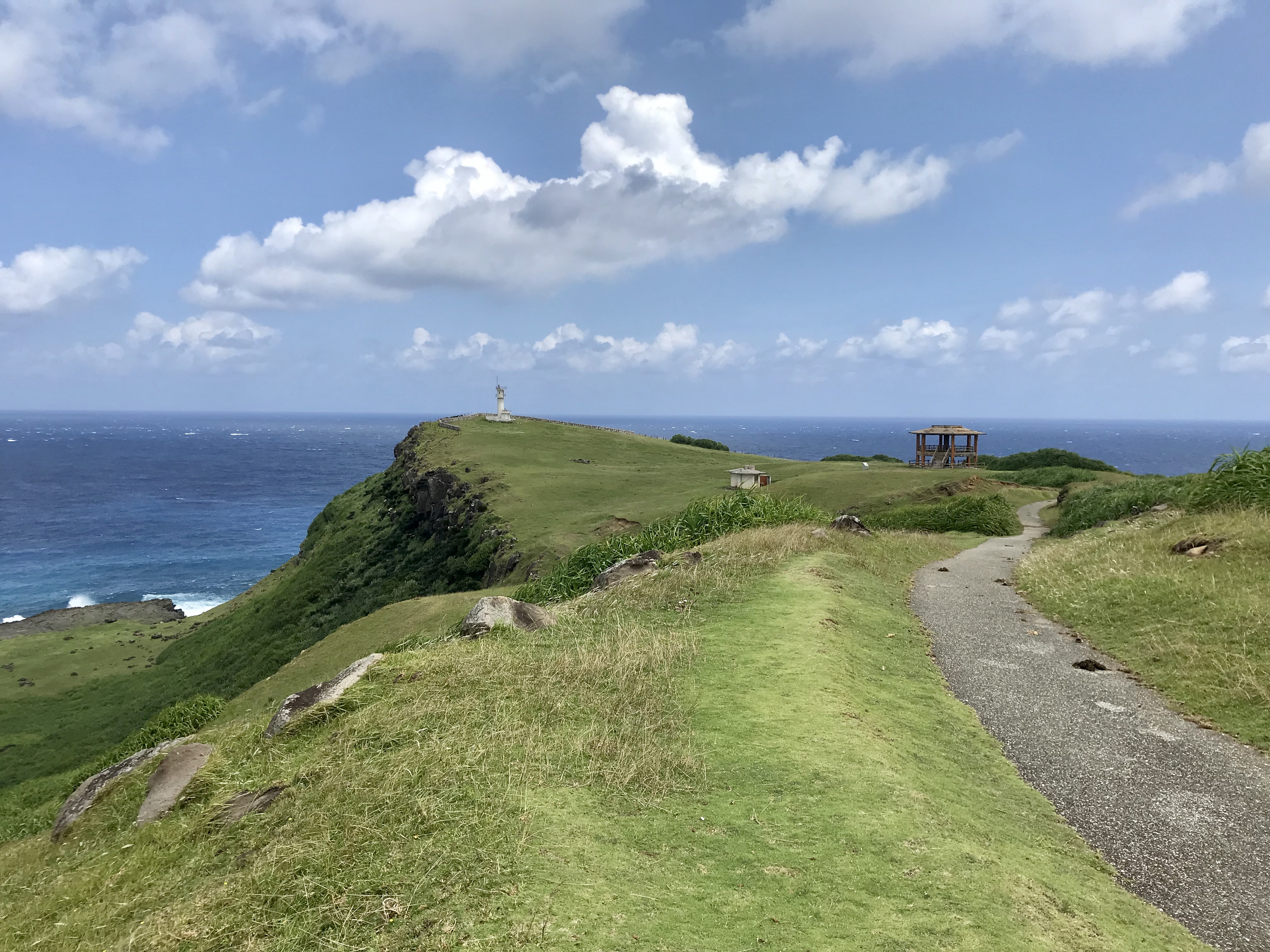 Yonaguni is probably most well-known for its diving spots. Many divers come to see the mysterious underwater Yonaguni monument. The Yonaguni monument is an unusually shaped rock formation located off the south coast of Yonaguni. It’s almost pyramid-like with several steps and smooth surfaces.

There is an ongoing debate regarding whether it was built by an ancient civilization or a natural phenomenon. We can’t weigh in on this debate, as we aren’t geological researchers. Perhaps it’s best for you to see it with your own eyes. Regardless of who or what created it, it is an impressive sight to behold.

In addition to the Yonaguni monument, adventurous divers worldwide also travel to see the large schools of hammerhead sharks between January and May. If you go diving with an expert, you are likely to see the sharks, as well as all of the other creatures of the sea that inhabit the waters around Yonaguni. Not for the faint of heart, though!

Being located in one of the most biodiverse regions of the world, Yonaguni is home to several unique species. Most famous among them are the Yonaguni horse and the Yonaguni moth.

The Yonaguni horse is a small chestnut brown horse native to Yonaguni Island. Measuring only 116-120 cm tall, it is classified as a pony. Unfortunately, it is currently a critically endangered species, with only 130 horses remaining. This number was an improvement from 1975, when there were only 59 horses due to the automation of farming practices.

Thanks to the efforts of the Yonaguni Horse Preservation society, they were able to reverse the decline of the horse.

Another fantastic creature on the island is the Yonaguni moth (A. a. ryukyuensis), one of the world's largest butterfly species. This butterfly is known as the "Ayami Habiru" locally, and in English, is called the Atlas moth owing to its size. It's larger than the average adult human hand, with a wingspan of 24 (9.4 inches). It can be found in other parts of East and South-East Asia, principally in dry tropical areas.

One of the most potent drinks in all of the Ryūkyūs can be found on Yonaguni, called "Hanashu" or "Dunan" liquor. It contains a whopping 60% alcohol content, making it flammable and thus unsuitable for export. Its traditional purpose is actually as an element of Ryukyuan spirituality.

Traditionally, when a person passes away, their body is placed in the family tomb without cremation, and two bottles of Hanashu are left in the tomb. Upon the 7th anniversary of the death, relatives of the deceased perform a bone washing ceremony using liquor from one of the bottles of Hanashu.

After the bones are washed, they are burned, and Hanashu is sprinkled over the ashes. The second bottle of Hanashu is either drunk or used for healing purposes for non-drinkers.

Hanashu plays a vital role in traditional Yonaguni spirituality. Over time, distilleries began producing liquor with less alcohol content, partly to make it suitable for export. The word for "liquor" in the Ryūkyūs is "awamori" or "aamui." The "awa"/"aa" part of the word means "foam" since back in olden times, the potency of liquor was measured by how much the foam rose after pouring it from a certain height. The "Hana" part of "Hanashu" means "flower" because the foam was so voluminous that it looked like a flower.

If you want to try this potent drink, you can head to Sakimoto Distillery, which is Yonaguni's oldest brewery. They offer many fine liquors for you to choose from.

Growing in the wild on the cliffs of Yonaguni is a leafy plant called Chomeiso. Chomeiso (peucedanum japonicum) is a member of the parsley family and is full of nutrients such as polyphenols.

The health aspects of the plant are reflected in its name 長命草, which translates to "long life grass/herb." It's used in various local dishes, such as a tofu stirfry or mixed into miso to make a paste.

In the Yonaguni language (Dunan-Munui), the word “agari” means “east”. As such, this observatory is located on the easternmost point of Yonaguni Island, where you can get spectacular views of the eastern coastline. Definitely not something to be missed.

This museum was built in 1979 to revive traditional Ori weaving. Ori is a geometric pattern weaved into fabric for traditional garments. It has an over 500 year history, and in the 1500s, the fabric was sent as tax to the Shuri government. After WWII, production declined significantly, but there are still weavers carrying on this practice today. Learn more about it at the Yonaguni Crafts Museum.

Kambunaga is one of the most important festivals on Yonaguni Island. Starting during the 10th month of the Lunar calendar, and lasting 25 days, it begins with “Kubramachiri”, which is a prayer for the expulsion of pirates, then it’s “Uramachiri”, a prayer for the breeding of cows and horses.

At the end of the festival, people will dance in a circle to a song called “Kiyu Ga Hi Dunta”.

Sunin do nu nigai do su (We pray for all people)

During your visit, we recommend staying at “Sakiharasou”, which is a bed and breakfast run by a lovely local woman. Both breakfast and dinner are included in the price, and you can sleep in a tatami room. There is also shuttle service from the airport available with a reservation.

We believe that staying at a bed and breakfast (called "minshuku") gives you a much more personal experience and better taste of local life than staying at a hotel.

This is a cinematically beautiful slice-of-life movie about Yonaguni. Produced by students, the director/main actor of the film Aika Tomori is from Yonaguni, and they did an excellent job showcasing their culture and the Yonaguni landscape in the film.

On Yonaguni, songs accompanied by a Sanshin are called “dunta” (on other Yaeyama islands, they are called “yunta.” There are some special dunta songs played and sung during festivals on Yonaguni. At the beginning of festivities, a song called “Mitisunai” is played, and to mark the end of the festival, a piece called “Dunta” is performed.

KANASA is a worker's cooperative, working towards providing healthy, ethical and sustainable products directly from Ryukyuan producers. Why not support our work by checking out our Shop?